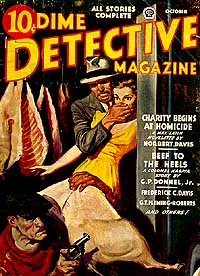 In his short career, Norbert Davis was one of the most reliable contributors to the detective pulps. He was born today in 1909.

Davis is one of the writers featured in The Beginner’s Guide to Pulp Fiction, Volume 2.

Davis was born in Illinois in 1909. His family moved to California and Davis studied law at Stanford University, but never took the bar exam.

He got his start with Black Mask in 1932 and quickly started selling stories to that magazine, as well as Dime Detective, Detective Fiction Weekly and Double Detective. Raymond Chandler was said to be a fan of his work.

In the 1940s, he began writing novels and selling stories to the slicks, including placing several stories in the prestigious Saturday Evening Post. In 1947, he collaborated with fellow pulp writer W.T. Ballard on a novel, Murder Picks the Jury.

In 1949, with his career slowing, Davis and his wife moved to Connecticut. In July of that year, the 40-year-old Davis died of carbon monoxide poisoning in an apparent suicide.